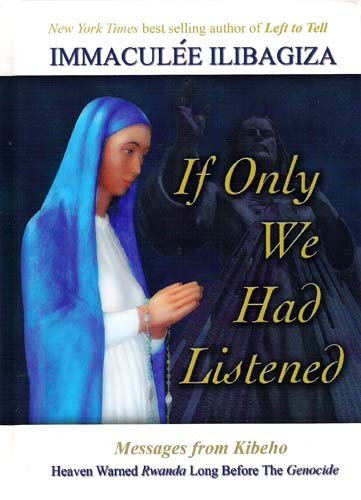 If Only We Had Listened by Immaculée Ilibagiza

Twelve years before Rwanda was devastated by genocide, the Virgin Mary came to Kibeho with a clear warning: My children, it does not have to happen if people would listen and come back to God. The visionaries who experienced the Kibeho apparitions, which have since been approved by the Vatican, reported that Mary showed them horrifying prophetic scenes including a river of blood, people brutally killing each other, and abandoned corpses with no one to bury them. The Rwandan people did not listen to Mary's motherly guidance and were unable to escape the tragic consequences when the terrifying scenes shown to the visionaries became reality, it was simply too late. If Only We Had Listened presents many of the profound messages that were given by Our Lady in Kibeho messages that could have prevented the tragedies in her homeland, and which should serve as a warning for the whole world.

Immaculée Ilibagiza is a living example of faith put into action. Immaculée's life was transformed dramatically during the 1994 Rwandan genocide where she and seven other women spent 91 days huddled silently together in the cramped bathroom of a local pastor's house. Immaculée entered the bathroom a vibrant, 115-pound university student with a loving family - she emerged weighing just 65 pounds to find her most of her family had been brutally murdered.

Immaculée credits her salvage mostly to prayer and to a set of rosary beads given to her by her devout Catholic father prior to going into hiding. Anger and resentment about her situation were literally eating her alive and destroying her faith, but rather than succumbing to the rage that she felt, Immaculée instead turned to prayer. She began to pray the rosary as a way of drowning out the negativity that was building up inside her. Immaculée found solace and peace in prayer and began to pray from the time she opened her eyes in the morning to the time she closed her eyes at night. Through prayer, she eventually found it possible, and in fact imperative, to forgive her tormentors and her family's murderers.

Immaculée's strength in her faith empowered her to stare down a man armed with a machete threatening to kill her during her escape. She also later came face to face with the killer of her mother and her brother and said the unthinkable, "I forgive you." Immaculée knew, while in hiding, that she would have to overcome immeasurable odds without her family and with her country destroyed. Fortunately, Immaculée utilized her time in that tiny bathroom to teach herself English with only The Bible and a dictionary; once freed she was able to secure a job with the United Nations.

In 1998, Immaculée immigrated to the United States where she continued her work with the UN. During this time she shared her story with co-workers and friends, who were so impacted they insisted she write it down in book form.

genocide  led by faith  our lady of kibeho