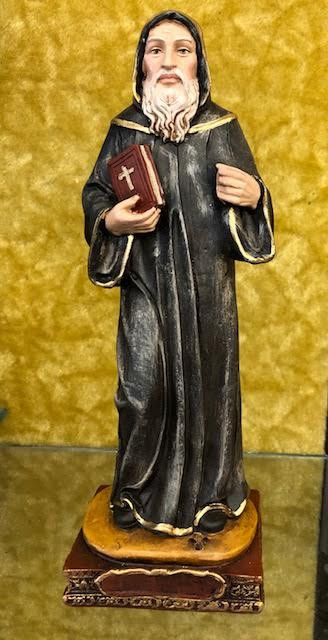 Saint Charbel Makhlouf or Sharbel Maklouf was raised by his widowed mother, she later remarried a man who went on to seek Holy Orders and became the parish priest of the village. Youssef was raised in a pious home and became drawn to the lives of the saints and to the hermit life, as was practiced by two of his uncles. As a young boy, he was responsible for caring for the family's small flock. He would take the flock to a grotto nearby, where he had installed an icon of the Blessed Virgin Mary. He would spend the day in prayer. In 1875, Charbel was granted by the abbot of the monastery the privilege of living as a hermit at the Hermitage of Sts. Peter and Paul, a chapel under the care of the monastery. He spent the next 23 years living as a solitary hermit, until his death from a stroke on Dec 24, 1898 from has been beautifully hand painted by the Widows of Colombian Violence. It's measurements are  9"H  x 3" round diameter base.