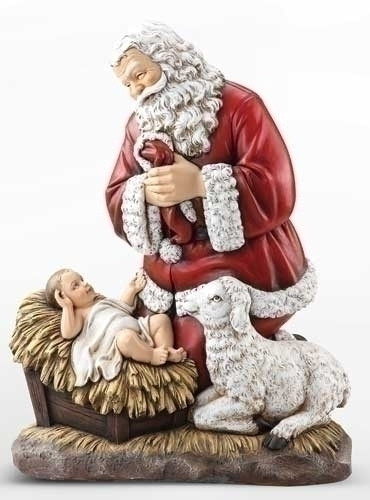 Slim Line Kneeling Santa Resin Figurine ~ Combining the two major symbols of Christmas - the Christ Child and Santa Claus - in a way that connotes their proper relationship - the secular subservient to the sacred - is an idea that goes back many years with Ray Gauer. While raising his own large family he became increasingly concerned about the over-commercialization of the holiday. To depict Santa Claus - St. Nicholas - on his knees before the newborn Christ Child, seemed a most effective means to counteract that trend.  The idea - which he humbly considers inspired - reached fruition in the beautiful figurine of the KNEELING SANTA which he commissioned the internationally renowned sculptor, Rudolph Vargas, to create in 1976. It has evolved into an extensive line of related products that have won a place of honor in Christian homes, schools and churches.