The Meaning of Christmas Advent 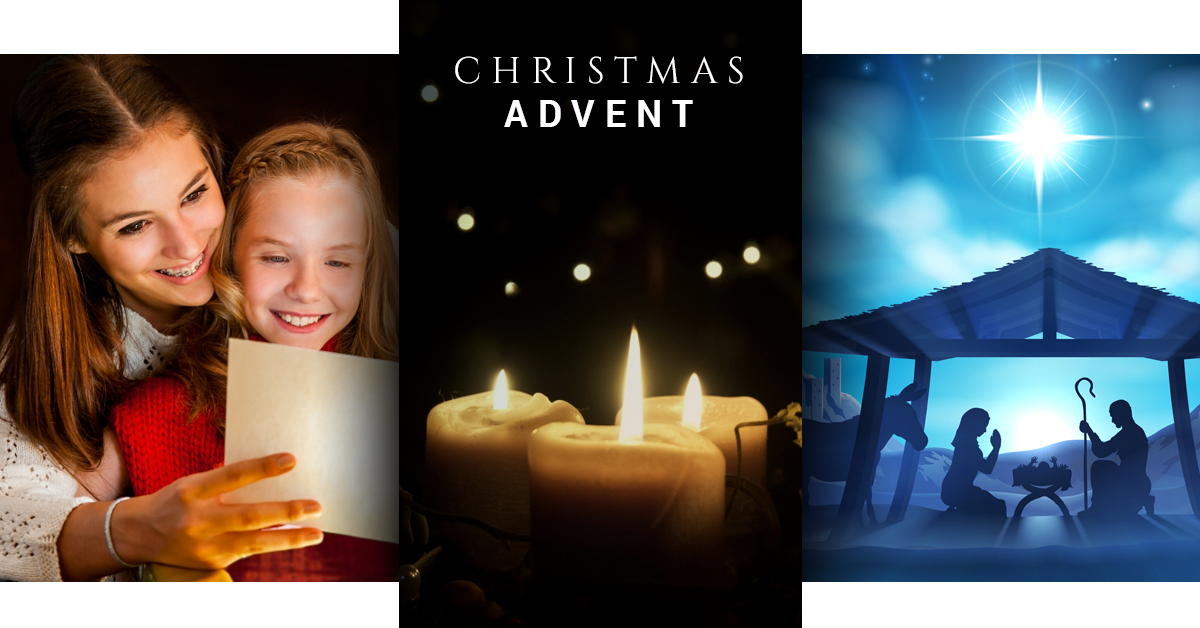 The turkeys have been eaten and the Black Friday shopping has kicked off the gift shopping season. We all know what that means: Christmas is just around the corner! During the next month, the drive to find presents and the best deals is going to become an all-consuming hurricane, sweeping up the unsuspecting in its destructive path. The commercialization of Christmas has continued to spiral out of control, and it’s all too easy to lose sight of the true meaning of the season. At St. Jude Shop, we want to take this time to gently turn our gazes from shopping season to Advent season, and remind ourselves what Christmastime is really about.

The word “advent” comes to us from the Latin, adventus, which means “coming.” Many scholars believe that Advent traditions originated in the fourth and fifth centuries in Spain and Gaul. The exact time and early traditions are not known; however, some homilies from the fifth century have been found which discuss preparations in a general sense. But there is very little from this time period to indicate that an official liturgical season had been established. A Synod held in 590 established that Mondays, Wednesdays, and Fridays starting in mid November would be offered according to Lenten rite until the Nativity. This seems to indicate that the season was a season of penitence more aligned with Lent than the modern Advent season. Pope St. Gregory the Great did have a collection of homilies that included a sermon for the second Sunday of Advent. By 650 A.D., churches in Spain included Sundays in the Advent season, setting the precedent for subsequent years when it became a time of preparation for the new liturgical year. 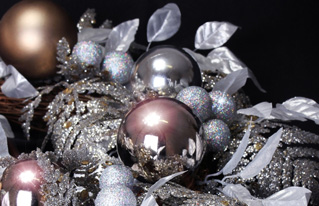 d themes have evolved over the centuries. In modern times, Advent still retains an echo of its penitential origins, but overall it has become a season of reflection and celebration. Today, Advent lasts for four Sundays leading up to Christmas day. The first Sunday of Advent is typically nearest to the Feast of St. Andrew, and so usually falls between November 27th and December 3rd. During Advent, Catholics prepare for and anticipate the coming of Christ. It’s a time that reflects the Israel of the Old Testament. The Israelites were in exile, waiting and hoping for a Messiah to deliver them. This promise was fulfilled in the birth of Jesus. So during this season, we celebrate the first coming of Christ and look forward to the day when he will return again.

The Traditions of Advent

Advent traditions tend to reflect the various cultures who observe it. Some are solemn and formal while others are more fun or even festive. Here are a few examples of some of the most common Advent traditions.

Advent wreaths are by far the most common and most popular Advent tradition. The Advent wreath originated in Germany and spread throughout Europe and America in the 1930s. The wreath itself is meant to represent the eternal nature of God, while each of the four candles serve as a tangible reminder of the four Sundays of Advent and the four virtues we meditate on during the weeks leading up to Christmas. The four virtues are Hope, love, joy, and peace. The large, white candle that sometimes stands in the center of the wreath is the Christ candle, and it is lit on Christmas Eve or Christmas Day to remind believers that Christ is the light of the world.

Browse our selection of Advent wreaths and candles today!

The Jesse Tree is another popular Advent tradition, although perhaps not as widely known as the Advent Wreath. The idea of the Jesse Tree comes to us from Isaiah 11:1 which reads “And there shall come forth a rod out of the stem of Jesse, and a Branch shall grow out of his roots...” The Jesse Tree is a symbol representing several different things. It is a symbol of the family tree of Jesus, as he was a descendent of Jesse through King David. In modern times, it has come to help symbolize the events of the Old Testament that led up to the birth of Christ. Throughout Advent, ornaments that represent key people and events are added to the tree as reminders, a tangible way to reflect on the story of Christ and the meaning his coming holds for our lives, both now and hereafter.

This tradition is one that many children across the Western world enjoy. There may be an empty manger for individual children, or the entire family can share just one. The goal is to fill the empty manger with straw throughout the Advent season and to place Baby Jesus in the manger on Christmas morning. Straw is placed in the manger with each good deed or acts of service, sacrifice, or love. These acts are done as a sort of gift for the Baby Jesus. It is a fun way to encourage a spirit of giving in honor of the gift of salvation we received from Christ Jesus.

Some families chose to incorporate the Mary candle into their Advent traditions. The custom includes decorating the Christ candle with a blue ribbon or veil on December 8th (the Solemnity of the Immaculate Conception). The candle is lit at meal times to serve as a visual reminder of Mary’s great faith.

These are just a few examples of some of the traditions that many observe during the Advent season. If you are like many people, you may be finding yourself in need of some distance from the rush for Black Friday deals and commercialized Christmas. Take a step back and turn your gaze to the Advent. After all, Christmas is a reminder of the gifts we’ve already received from God, and the most important gifts yet to come.

For all of your Advent needs, St. Jude Shop is here to help. Shop with us today, and find all of the religious goods you need to make this Advent season all it was meant to be. 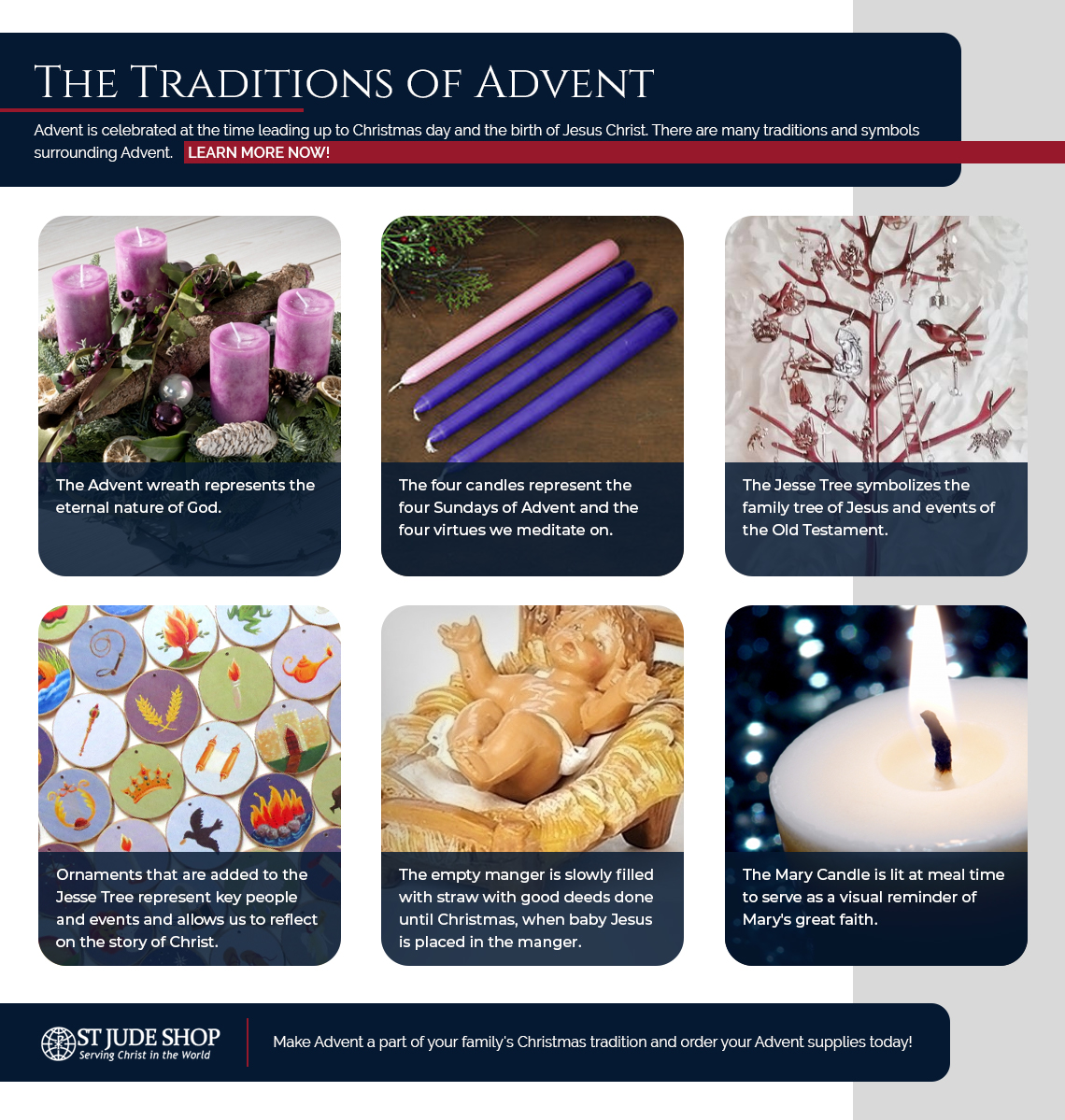