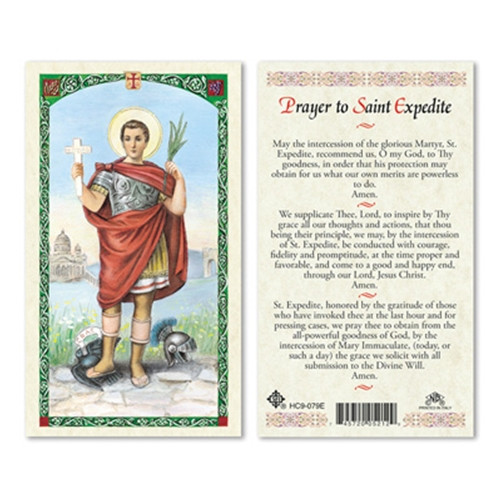 St Expedite Laminated Holy Card.  St. Expedite was a Roman centurion who was martyred for converting to Christianity. According to tradition, the Devil taking the form of a crow appeared to Expedite the day he decided to become a Christian, and told him to defer his conversion until the next day. Expeditus stamped on the bird and killed it, declaring, "I'll be a Christian today!" For this reason, he is known as the patron saint against procrastination, as well as emergencies and quick solutions.

St. Expedite is depicted on the front of this laminated, full color prayer card as a Roman centurion, holding a palm leaf, a symbol of martyrdom, in his left hand, and raising a cross with the word hodie (today) on it in his right hand. His left foot is stepping on a crow, which is speaking the word "cras" (tomorrow). The back of the card has a prayer asking for St. Expedite’s intercession for a specific intention.