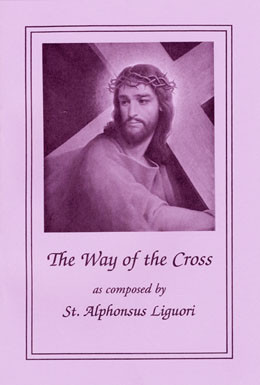 The Way of the Cross, Large Print Edition

$1.30
Bulk Discounts for The Way of the Cross, Large Print Edition

The Way of the Cross ~ St. Alphonsus Liguori

During the Turkish occupation of the Holy Land in the late Middle Ages, when pilgrims were prevented from visiting its sacred sites, the custom arose of making replicas of those holy places, where the faithful might come to pray.  One of the most popular of these devotions was the "Stations of the Way of the Cross," which were imitations of the "stations," or stopping places of prayer on the Via Dolorosa in Jerusalem. By the late sixteenth century the fourteen stations as we know them today, were erected in almost all Catholic churches.

Among the best known prayers for the Way of the Cross are those first published in Italian by St. Alphonsus Liguori in 1761, which are presented here in a new, revised translation. In his brief introduction to this devotion, St. Alphonsus wrote: "the pious exercise of the Way of the Cross represents the sorrowful journey that Jesus Christ made with the cross on His shoulders, to die on Calvary for the love of us.  We should, therefore, practice this devotion with the greatest possible fervor, placing ourselves in spirit beside our Savior as He walked this sorrowful way, uniting our tears with His, and offering to Him both our compassion and our gratitude."