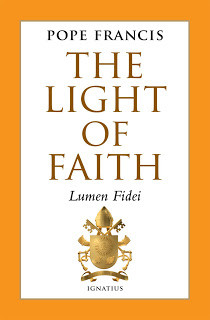 "Lumen Fidei' is divided into four parts, which can be seen as four aspects of one whole. quotes Archbishop Miller

"It starts with the faith of Abraham, the man who recognised in the voice of God 'a profound call which was always present at the core of his being', to the faith of the People of Israel. The history of the faith of Israel, in its turn, is a continual passage from 'the temptation to unbelief' and the adoration of idols, 'works of the hands of man', to the confession 'of God’s mighty deeds and the progressive fulfilment of his promises'. This leads ultimately to the history of Jesus, a summary of salvation, in which all the diverse threads of the history of Israel are united and fulfilled. In Jesus we are able to say definitively that 'we know and believe the love that God has for us' because He is 'the complete manifestation of God’s reliability"'.

"In the second part, the encyclical forcefully raises the question of truth as one which is 'central to faith'. Because faith has to do with knowledge of reality it is intrinsically linked to truth: 'faith without truth does not save… it remains a beautiful story…or it is reduced to a lofty sentiment'”. “Faith helps us to draw out the profound meaning of reality. In this way we can understand how faith is able to 'illuminate the questions of our own time about truth', the great questions which arise in the human heart when faced either with the beauty of reality or by its dramas.

Archbishop Muller went on to highlight several key points of the encyclical, starting with “the origin of faith, which if it profoundly touches the believer, is an event which does not close the person in on himself in an isolated and isolating 'face-to-face' with God. Faith in fact 'is born of an encounter which takes place in history' and 'is passed on…by contact from one person to another, just as one candle is lighted from another'”.

Cardinal Ouellet emphasised that the encyclical “speaks of faith like an experience of communion, of the enlargement of the 'I' and solidarity in the path the Church takes with Christ for the salvation of humanity. Objectively, Pope'sthe light of faith guides the meaning of life, brings comfort and consolation to unsettled or despondent hearts, but also commits believers to place themselves at the service of the common good of humanity through the announcement and authentic sharing of the grace of God. … Subjectively, faith offers an opening to Christ's Love, a welcome, the opportunity to enter into a relationship that enlarges the 'I' to the dimensions of 'we' which is not merely human, within the Church, but also truly divine, and therefore an authentic participation in the 'we' of the Father, the Son and the Holy Spirit”.

Starting from this trinity 'we' that is extended to become an ecclesial 'we', the encyclical naturally refers back to the 'we' of the family, the most privileged context for the transmission of faith. … “Finally”, the cardinal concluded, “the encyclical contemplates Maria, the ideal personification of faith, who heard the Word and cherished it within her heart, she who followed Jesus and let herself be transformed by Him”.

The final presentation was given by Archbishop Fisichella. “'Lumen Fidei'”; he concluded, is an encyclical with a strong pastoral connotation. … Pope Francesco, with his pastor's sensibility, manages to translate many questions of a strictly theological character into themes that can assist in reflection and catechesis. … No-one should be afraid to look to great ideals and to pursue them. Faith and love are the first to be proposed. In a period of cultural weakness such as the present age, this invitation is a provocation and a challenge to which we cannot remain indifferent”.