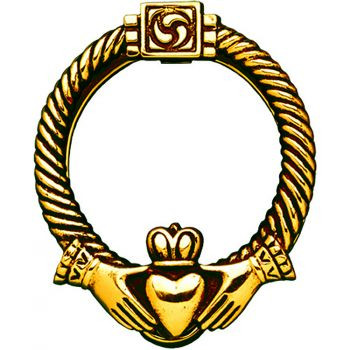 An inviting door knocker. Held by the hands of love, the heart wears the cross in a traditional Irish sign of enduring love. Crafted of solid bronze with antique wash, back plate has stud with celtic design. Measures approximately 5" in diameter. Four mounting screws included. Gift box. The Claddagh Symbol:The Claddagh symbol is part of rich Irish tradition. The design and customs associated with it originated in the Irish fishing village of Claddagh, located outside the old walls of the city of Galway. The Claddagh ring was first crafted in the 17th century during the reign of Queen Mary II, while some elements of the design are much older. The Claddagh's distinctive design features two hands clasping a heart that is typically surmounted by a crown. The elements of this symbol are often said to correspond to the qualities of love (the heart), friendship (the hands), and loyalty (the crown). The expression which was associated with these symbols in the giving of the ring was: "Let love and friendship reign."  Gifts bearing the Claddagh symbol are given in friendship and the Claddagh ring is often presented or worn as a wedding ring.