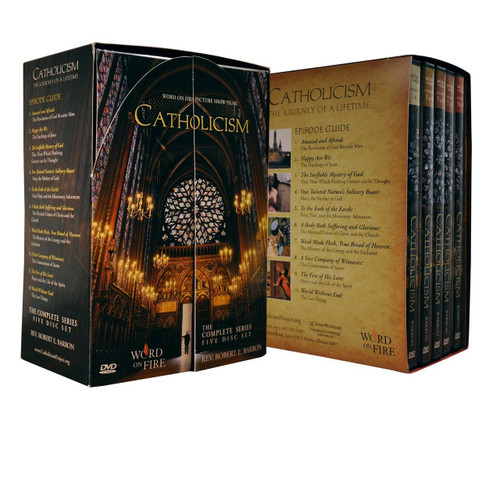 “What I propose to do in this book is to take you on a guided exploration of the Catholic world, but not in the manner of a docent, for I am not interested in showing you the artifacts of Catholicism as though they were dusty objets d’art in a museum of culture.  I want to function rather as a mystagogue, conducting you ever deeper into the mystery of the incarnation in the hopes that you might be transformed by its power.” –Father Robert Barron

What is Catholicism? A 2,000 living tradition? A worldview? A way of life? A relationship? A mystery? In CATHOLICISM, Father Robert Barron examines all these questions and more, seeking to capture the body, heart and mind of the Catholic faith.

For the first time, in breathtaking, high-definition cinematography, the beauty, goodness and truth of the Catholic Faith are illustrated in a rich, multimedia experience. Journey with acclaimed author, speaker and theologian Fr. Robert Barron to more than 50 locations throughout 15 countries. Be illuminated by the spiritual and artistic treasures of this global culture that claims more than one billion of the earth's people. From the sacred lands of Israel to the beating heart of Uganda...from the glorious shrines of Italy, France, and Spain, to the streets of Mexico, Kolkata, and New York City, the fullness of CATHOLICISM is revealed. Journey deep into the Faith as you watch each episode. Mike Leonard, a veteran NBC Today Show correspondent and acclaimed filmmaker, is the Executive Producer of this groundbreaking series. The box set includes five DVDs, each containing two episodes. Each episode runs 50-60 minutes. English and Spanish subtitles are included as viewing options.

CATHOLICISM will have a national footprint. This series will be of great interest to viewers who want a better understanding of the impact and meaning this faith has throughout the world. --Dan Soles, WTTW Senior Vice President and Chief Television Content Officer, PBS affiliate - Chicago